UNC Wesley is a United Methodist ministry (though other denominations are not only welcome, but very common) to the students (and, as I’m frequently reminded, community) of the University of North Carolina at Chapel Hill. In keeping with its mantra of student leadership, the annual t-shirt is created, selected, and purchased by students. These are my submissions.

This shirt was very much an inside joke among UNC students. It is probably my favorite to date because of its connection to the atmosphere on campus at the time, its cleverness, and the fact that I made the front graphic in paint because I hadn’t learned to use Adobe Creative Suite yet.

(Warning: basketball recap coming) As any college basketball fan may remember, UNC was stacked with talent that year. Harrison Barnes was starting to live up to his hype, Tyler Zeller was showing what a few years with Roy can do for a big man’s career, John Henson was blocking everything in sight, Kendall Marshall was starting to average double-digit points to go with is double-digit assists, and we had depth at every position even after losing Leslie McDonald to a long-term injury in the off-season. We beat the eventual-champion 1-and-done Kentucky Wildcats team early in the season and knew the National Championship would likely be a rematch of that game. Then we lost Dexter Strickland to an ACL tear mid-season. That meant we were thin at point guard behind Kendall, but we still had plenty of guards. Then the ACC Tournament came around and Henson picked up a wrist injury. If we could just get him healthy before the big dance, we’d be good to go. We played the first game without him and won easily, then he played against Creighton. He took a couple swipes from Doug McDermott early on, but looked to be ready to come back into the team. It looked like were going to be ok. Then the unthinkable happened. Kendall Marshall took a hard foul on a drive in what amounted to garbage time and landed wrong on his right wrist. It was fractured. He was done for the season, meaning that our point guard rotation consisted of two players that had never played more than 10 minutes at point guard in any meaningful game. Pretty soon, an image was circulating on social media. It showed an x-ray of a right hand with two screws in the wrist and a championship ring on its finger. Beneath the x-ray was the word “BELIEVE” in Carolina blue block letters. Within days, the graphic was everywhere. UNC students used it as their profile picture, put it on t-shirts and posters, and referenced it in their class discussions. The belief was there.

At this point, Kendall Marshall took advantage of his Twitter popularity (@Kbutter5) to promote a sort of pay-it-forward campaign using the hashtag #passfir5t. The hashtag was a pun on his playing style as a distributor and the mentality of caring for others before yourself. The “s” was replaced with a 5, his jersey number. He retweeted stories and offered his own inspirational words for the remainder of the team’s tournament run and throughout the rest of the school year.

I had the clever idea to spoof both the graphic and the hashtag on a Wesley t-shirt. I made the graphic relevant to Wesley by removing the championship ring and the screws and adding a hole (implying that rather than Kendall Marshall, it was the hand of Jesus after he was nailed to the cross). Doing this in MS Paint was a time-consuming process, but the result is the image on the front of the t-shirt. I replaced the #passfir5t hashtag with #passiton, the title of a popular hymn urging Christians to share the love of God with their neighbors throughout the world. In keeping with Kendall’s jersey number replacing a letter in the original hashtag, I replaced the “t” with the United Methodist cross and flame.

This shirt draws from the best-known symbol of the University of North Carolina, the Old Well, and the Bible story of Jesus talking with the Samaritan woman at the well. As an official student organization of the university, we were allowed to use the logo. I toyed with the idea of making Jesus’ words red, but decided against it. Before the final printing, the wording was spliced with the equivalent text from another version of the Bible in order to make the language gender-neutral. I wasn’t excited about that, but ultimately the message is the same and the wording used came only from two similar versions.

This shirt design features the mission statement adopted by the ministry that year: “Love God. Love Others. Change the World.” That text on the back is set around a globe featuring a large heart over the location of Chapel Hill, NC. I had designed this logo for the Big Wesley Auction, an annual event (recently renamed) that raises money for all of the ministry’s mission work, be it locally or internationally. The globe represents Wesley’s mission work around the world and the heart represents the “Big Wesley Love” (a major theme in all of Wesley’s ministry) that drives it.

The front of the shirt shows the United Methodist cross and flame, the symbol for the denomination. Because flame is typically red on a white background, I reversed the colors so that the flame still pops.

I’m not really sure what to call this design. As an owner of dozens of rock band t-shirts, I thought it might be cool to make a Wesley shirt that didn’t draw from the typical format of a large graphic centered on the back and two lines of text on the front. After submitting the Well design, I didn’t anticipate this being chosen as the winner. I mainly just wanted to see if people would be supportive of something like this.

When Wesley moved into a new space on Franklin Street, the ministry set aside one room as a prayer room. It is a quiet, secluded room that had been used by the previous tenant to store several servers. There are prayer mats on the floor, comfy chairs, candles, and guides for meditation and prayer. But one of the most interesting pieces of the prayer room to me was one entire wall painted over with chalkboard paint. Students would write inspirational messages to each other, illustrate scripture passages, and share the excitement of their joys and the burden of their concerns. I wanted the magic of the chalk wall to extend outside the few square feet of the prayer room. So, I photographed some of the chalk artwork on the wall and made the shirt’s back graphic featuring real illustrations by Wesley students.

I can’t claim full credit for the concept behind this design. My sister suggested a shirt based on the lyrics of a song that was popular at Wesley during this year, Gungor’s “Beautiful Things”. She wanted something more colorful than the typical Carolina blue or white shirt. I volunteered to draft something and worked with her to come up with this.

Close-up view of the back design 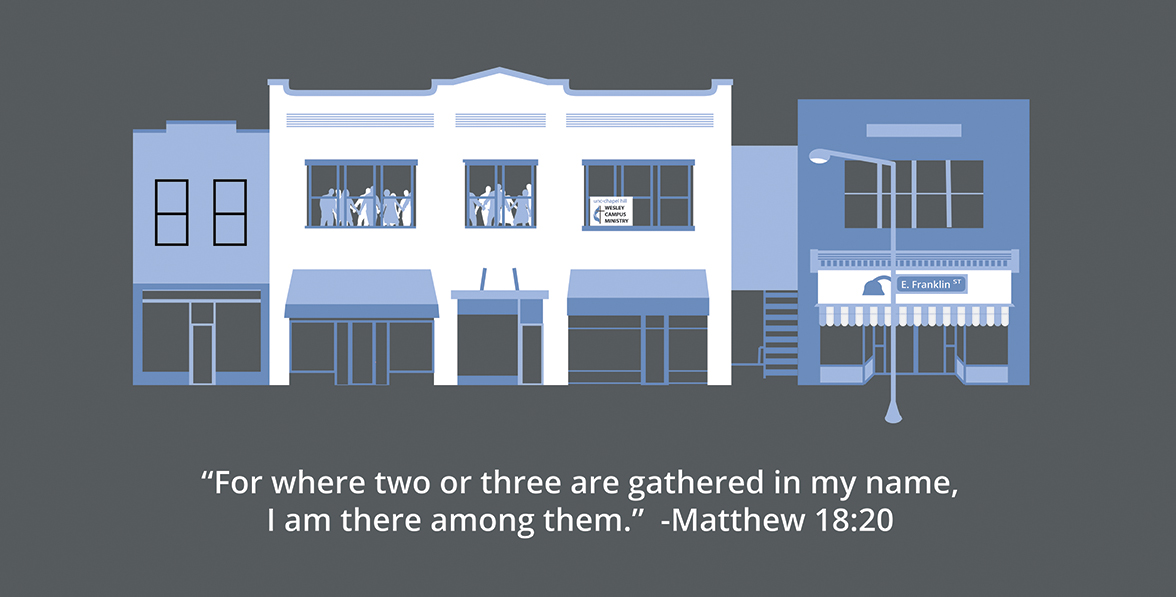 This shirt shows the facade of the Wesley Loft on Franklin Street in downtown Chapel Hill. I like this design because it brings attention to Wesley’s presence among the iconic storefronts of Chapel Hill. Among others, you can see Shrunken Head, Sutton’s Drug Store, and the steps down to the alley with Bandido’s and the old Rathskeller. Inside one of the windows that overlooks the street, you can see the Wesley sign that is visible from street level every day (pictured on the front of the shirt). Through the other two windows, you can see students holding hands in the Wesley Circle, which ends every Wesley event. In the Wesley Circle, students share joys and concerns with the group. Students share in the excitement of their peers’ joys and volunteer to “take” concerns, meaning that they will pray for the person or situation mentioned as long as the feel led. Fun fact: although the street lamp post in the design does exist, it doesn’t actually have a Franklin Street sign.